The day starts off with the glance at the Monreale’s Cathedral, masterpiece of art of the norman’s Sicily gilded of 12 century and bizantine frames that gives the full splendour in Christ Pantocratore, a breathtaking show.
Then continuing to towards Palermo the maintown of Sicily, whose origins goes back on the phenix colinisation spell. Occupide by the saracines before being conquered by the norman in 1072, has real mile stones of arabian’s and norman’s art (Unesco).
We are going to visit the Cathedral and mediaval’s monument of the 12 century with a strong arabian influence, built on the site of what was the arabian mosk.
A jolly promenade along the Cassaro’s street, the most ancient heart of history, till Piazza dei quattro canti where you could admire its flabbergasting fountains and buildings , built in the five hundred century.

The day resumes with a visit at the most rappresentative venues of the city, jewels of arabian-norman art (Unesco),Cathedral, Cappella Paladina,Quattro canti,Teatro Politeama, Palazzo
dei Normanni, Catacombe dei cappuccini, Chiesa Martorana, Fontana Pretoria, ( do enjoy on shooting pictures of stairs, concentrics swimmingpools, games on water and above all the tenth statues that rappresents the Gods of the Olimpo and the Palermo ‘s rivers, at the end of it sease the moment to renfresh yourself from the sultry sicilian’s weather).

Do discovered the popular’s traditions visiting the
well known market Di Capo that goes back from the arabian dominium where you could enjoy and taste the Palermo’s street food.
Our walk is ending with the discovered of the Teatro Massimo ‘s open air the greatest of Italy and one of the most stunning of Europe. 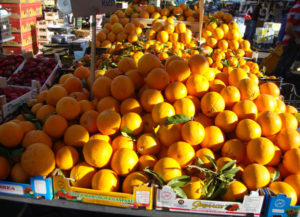 After having seen the Vucciria’s market painted by Guttuso master, it is adorable seeing it by person: it is one of the renowned Palermo’s market together with Ballarò, Capo, and Borgo Vecchio. If you do have to buy something or don’t have to, the entertainment among hawkers or cart drivers is garanteed.
When night falls the Vucciria becomes the heart of Palermo ‘s night life , crowed by students that fancy enjoying themselves until the crack of dawn. At any hours of the day and night, the Palermo ‘s markets are a boost of life and colours to don’t miss at all.

Gazing at the north, the reconiseable Monte Pellegrino ‘s silhouette closes at north Palermo’s bay. If you aren’t satisfied to see it on all these post cards Palermo ‘s skyline as Empire State Building that is in New York, the cape’s mountain is a natural riserve either.
It contains beauties of all types: monuments, towers, ancient palaces, Santa Rosalia’s Sanctuary and above all the complex of the Grotte dell’Addaura, that are live graffities that goes back at the Paleolithic era.
Shortly the first people of Palermo lived here.
On the 14 and on the 15 of July each hear se celebrate the festivity of Santa Rosalia, by processions and all kind of carts, and on the 4 of september there is a celebration of the leturgic party of Santa Rosalia. If you do have or don’t have a favour asking to Rosalia anything she truely deserves certainly a visit. 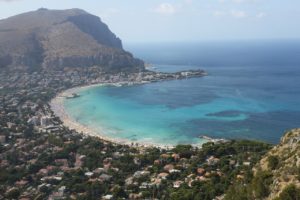 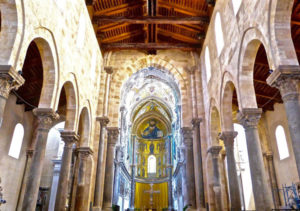 CITY TOUR OF CEFALÙ AND THE TOWERS OF ITS CATHEDRAL

At the food of rocky cape, in the Palermo ‘s province ,rises the most astonishing neighbourhoods of Italy, Cefalù ‘s town.
Every year sieged by tourists, foreigners and italians. The town developed around Cefalù ‘s Cathedral wanted by Ruggero 2, it gas kept by the centuries its ancient look with its narrow streets of the storic centre typical old age.
The building that give fame at the town are created architect decorations and the many churches around displaies all the importants of the bishop see.
Above all caracteristic the navy neighbourhood with the ancient houses on the seefront.
Do admire Cefalù from the top , do enjoy the breathtaking on the two towers of the Cathedral one of the most cracking spaces of the norman’s Cathedral, keeping the Cathedral majestic.
The two towers are different, one has a square shape assamble by faiery merly simbolize the power of the church.
The other has a shape of an eightended tree with Ghibellino Merlo, that simbolize the current power. 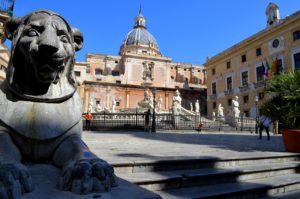 At the end to fresh and up yourself: the mighty spring and smart of Pretoria, in the same square ,it seems that it doesn’t have much to do with the mix artistic and architeture of Palermo.
Being frankly it had been created in Firenze, in the five hundred century, after it had been moved and put in Palermo do enjoy yourself at shooting pictures its stars, the concentric tubs, watergames, and statues of Gods of Olimpo.

Al-ziza means in arabian ” amazing” : the indication itself is worth more then anyother review or advice of travel.
The palace shape arabian-norman built in 1165 as a real summer resistance a time surrounded by a huge park of hunting currently far from the heart of Palermo among minor fashinated buildings its worth having a go at them to enjoy its splendor.

The distintive element of Santa Maria dello Spasimo’s church, in the ancient district of Kalsa nor the travellers that don’t pay heed will see that the roof
is missing. That collapsed in the middle of seven hundred century has never been built. Restored at the end of the last century. The church is even more fashinating in this version and hosts gigs and events, obviously outdoor.

Halfway beetwen a noble palace and austerity castle. The palace of Chiaromonte Steri, built in 1320 by the will of earl Manfredi Chiaromonte, after became the house spanish viceking, currently hosts collage university of Palermo do not have to enroll youself to visit it : it’s open to the people! One of the main attractions of the palace together with the lovely earing hall written by graffities, is the well known painting La Vucciria of Renato Guttuso.